THDi – New Standards And The Impact For The UPS Industrial Application

The objective of this article is to explain the THDi for the UPS industrial application, mainly regarding the new statements of the revised standard, which will become valid soon.

Generally speaking, the Uninterruptible Power Supply (UPS) can be considered as a conversion system and the technology used for the input stage of the UPS determines the type and quantity of harmonic pollution generated and injected into the upstream mains power supply.

In a double conversion UPS for example, the AC/DC converter element of the UPS (or rectifier as it is otherwise known) is connected directly to the mains power supply. For a Silicon Controlled Rectifier (SCR) thyristor-based rectifier, if the converter devices are constantly conducting (SCRs fully on), then the total harmonic distortion generated on the current waveform (THDi) during normal operation is ≤30%. With phase angled control of the SCRs (reduced conduction of the SCRs), the distortion level increases. This can introduce and create serious problems for the installation:

Non-linear loads (in this case a UPS) inject the generated harmonic currents into the upstream supply circuit and depending on the level of THDi and the impedance of the upstream circuit, will cause a distortion of the voltage supply. Because of this, EMC Standards define and impose limits to permissible voltage distortions in low voltage grids. These restrictions are not fixed but are changing and evolving over the time.

In order to calculate this effect, the upstream impedance value, the generator power and the level of harmonics created by the UPS must be known. These values can be used to identify the voltage distortion caused by the UPS at the PCC, if the UPS is considered as the only load powered by the upstream source. In the case that other loads besides the UPS are supplied by the source, the harmonic voltage distortion must be calculated by including the harmonic pollution generated by the other loads also.

In terms of impedance, it is the case that in low power rated supply systems, the impedance is high. The impedance decreases as the power of the supply system increases. Based on this, the effect of the harmonics is potentialized in systems of lower power ratings, because the voltage is distorted more, and this increases the harmful effects on the grid. This is the main reason why in the new statement for the standard IEC 62040-2:2016 (referenced later in this document), that the harmonic tolerance increases depending on the power ratio (Grid/UPS) of the system.

Table 2: Comparison between 6 pulse and 12 pulse with harmonic filter

Table 3: Comparison between 6 pulse and 12 pulse without filter

According to IEC 61000-3-12, the requirements of current harmonics are shown as below:

Rsce is defined as the short-circuit ratio and is described as the ratio between the short-circuit power of the grid relative to the apparent power of the UPS. Summarizing therefore, for power ratings up to approximately 50kVA (400V 3 phase systems), we will have to comply with the harmonic levels as defined for Rsce≥33 to cover all kinds of grid, which means an IGBT technology AC/DC converter on the UPS front-end.

However, for the industrial applications, where the short-circuit power of the grid is usually higher than 5kA, this can be partially complied with, using the harmonic levels as defined for Rsce≥66.

Representing this information in diagram form, whereby device power is proportional to its block size, we have the following diagram.

Please see below a working example of the Rsce calculation, based on an industrial UPS (typical values):

So, the Rsce will be:

The typical Rsce will not be lower than 66 for industrial applications, because 50kVA is the biggest commercial rating covered by the new standard (in 400V and 3 phase systems) and the mains short circuit current is usually >5kA. 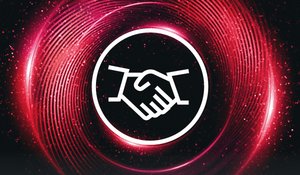 To the partner portal

We use cookies on our website. Some of them are essential to ensure functionality, while others help us to continuously improve our online offering. You can find more detailed information in our privacy policy and on our cookie page. You can also edit your settings there yourself at any time.

Here you can select or disable different categories of cookies on this website. By clicking on the info icon you can learn more about the different cookies.